Chasing bears in Canada was not something we’d imagine we’d need to do on our Canadian road trip. But as it turned out, bears can be much more elusive than you might think. Or come to expect once you’ve devoured as many travel blogs as I had prior to our trip.

Plus, all of the road and trail signs warning of bear activity, the solid bear-proof rubbish bins and food caches, and the abundance of brochures and posters on bear behaviour and bear safety at every hiking trail, campground and picnic area across the Yukon, British Columbia and Alberta led us to expect bears around every corner!

So bears made it into our Top 5 and Flop 5 all at once. One of the many bear signs across British Columbia For six weeks, we only threw rubbish into latch-release bins like this one in Kananaskis Country, Alberta

WHERE ARE THE BEARS?!!

So, we expected bears. Everywhere. Literally.

And after being taken completely by surprise by our first black bear rushing across Highway 28 on Vancouver Island on Day 6, we thought we were onto something great! Unfortunately, then followed an abject lack of bears until Day 21 when we finally saw a bunch of them along the Stewart-Cassier Highway (#37).

Despite all of the other people’s stories telling us of their bear encounters, and coming across torn up berry bushes and dug up soil whilst hiking in Kluane National Park (with bear spray at the ready!) and rangers telling us that grizzlies were around, we had almost given up on seeing any bears by the time we left the Yukon. Though I must admit that I was kind of glad that we didn’t meet a grizzly on our hikes in Kluane! I was willing the bear sculpture to turn into the real thing (Tombstone Territorial Park, Yukon)

HERE ARE THE BEARS!

And then six black bears came along on the Stewart-Cassier Highway in BC, all within 45 minutes and about an hour’s north of Meziadin Junction. Apparently this is prime bear encounter country so with a bit of luck, you should see some along the side of the road.

When we stumbled upon our first black bear, I was beside myself with excitement, and I’m not sure I even got the words “BEAR, BEAR!” out! I was close to hyper-ventilating, I think!

You will have to excuse my wobbly photography skills with all these photos as most of them are fairly blurry. It is hard to believe that bears – or any wildlife – don’t just want to stand still so that I can take that perfect shot. Inconceivable! 🙂 Busy munching or sniffing me?? Bears are keen on leafy greens and berries. Are we related?? Tumbling out of the bushes not five metres away from my car window!

I got completely smitten by the bear and then getting scared stiff because he stared right into my eyes, thinking he was going to pounce and eat me! I never knew I could wind up a window this fast! The husband rolled over laughing!

Eventually the bear toddled off but we were pumped and ready for our next encounter! We didn’t have to wait long… first a mummy bear with her cub and then a teenage bear who was happy enough to sit and scratch himself while we watched on. He was so adorable! Looking around before he scampered away

We saw a couple more bears that night but then that was it until we hit the Rockies. We briefly saw a black bear as we were coming along busy Yellowhead Highway (#16) near Rearguard Falls but had to wait until Day 33 when we struck gold in Kananaskis Country: Grizzly bears! Sneaky Mr. Grizzles crossing the road behind us…

Mr. Grizzles leisurely crossed the Kananaskis Trail (Highway 40) some 100 metres in front us, getting me so insanely excited that I could only point my finger again and again but not getting any words out!

He then disappeared into the undergrowth but headed parallel to the road alongside us. Just strolling, he was crazily fast but we managed to keep up with him and spotted him every few metres. At last he disappeared for good, only to double-cross us and head back across the road behind our van! What a sneakster!

And then he was off for good… half hour later we came past the same spot and Mr. Grizzles had been replaced by a much smaller and supposedly younger version! Miss Grizzles hung around hardly perturbed by us and the mini bear jam we all caused. Happily eating by the side of the road SO, WHAT’S THE DIFFERENCE BETWEEN A GRIZZLY AND A BLACK BEAR ANYWAY?

Both bears can have brown or black fur (and a few other colours like blonde) but we really noticed how much bigger the grizzlies were. Adult males can weigh about 250 kg whereas a male black bear may only grow to 135 kg on average.

The shoulder hump in grizzlies is pretty distinctive; just have a look at the black bears above which have really flat back and compare that to Miss Grizzles here. She’s also got these round ears and has a much bigger head whereas the black bears have these cute pointy ears and quite a small head for such a big animal.

There are a few other features like the shape of their snout or the length of their claws. But the one thing that people kept telling us was that the grizzly is the king and will chase any black bear away from the delicious salmon runs when it’s time for fattening up for the winter. Unfortunately, we didn’t get to see such wild behaviour.

For more information on bears, especially around staying safe, check out Parks Canada on bear safety. 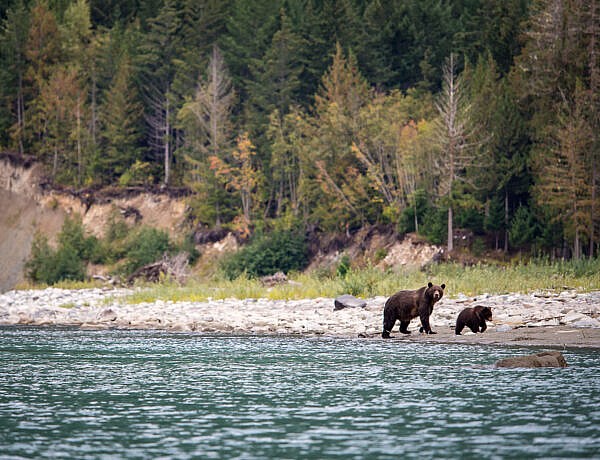 Kluane National Park (Yukon) from Above