Hamilton Island in the Whitsundays isn't just made for snorkelling the Great Barrier Reef or lounging on the beach. Take one of these five scenic walks for a short hike or sunset views on Hamilton Island.

Outside the wet season, Hamilton Island is usually perfect for exploring the Great Barrier Reef. But we were ‘lucky’ enough to score a long weekend full of rain, low cloud, and overall uninspiring weather in early May.

So what do you do when don’t feel like lazying around the beach on overcast days?

Simple – you do some hiking on Hamilton Island. And catch sunsets.

READ MORE: 5 Things to Do on Hamilton Island during the Rainy Season Depending on your fitness level, there are plenty of options to keep you busy for a couple of days or longer if you’re keen on venturing down every single track.

With a total area of only 5 km2 across the whole island, you’ll be able to explore a fair few of the Hamilton Island walks in not much time at all. Well… if it wasn’t for those hills, that is!

Pretty much all of the walking trails are accessible from around the Reef View Hotel at the Scenic Trail entrance just off Resort Drive. The trail head is at the back of the hotel where the conference centre is located. Sounds complicated but it’s actually pretty easy to find. There are two other trail heads, one at Palm Valley and the other at Hideaway Bay at the eastern end of Catseye Beach. The latter was still closed in early May after the March cyclone. Palm Valley is around the southern part of the island, close to the airport (and thus not particularly convenient for most visitors) so we ended up only using the Scenic Trail one.

It’s a bit of steep climb initially but we got some nice views of Catseye Beach, Hamilton Island and across to Whitsunday Island along the way.

Exploring the walks on Hamilton Island requires some level of fitness since you’ll be starting more or less at sea level and the trails all take you up to a fire trail along the ridge of the hills. From there you can either continue on to various lookouts with further steep sections or head down again on the other side to beaches and coves. I was huffing and puffing the whole time, a sure sign that any hiking fitness I may have had in Canada has well and truly disappeared…

Whilst there aren’t that many trails, the trail junctions can be a bit confusing so it’s best to get yourself a map from reception. Ask for a map of the “walking trails“, otherwise you’ll just get a map of Hamilton Island that shows you where the pools, shops and restaurants are! 🙂

The map also contains some very useful information, like drink lots of water, 1-2 litres per person, per hour.

All distances outlined here are from the Scenic Trail entrance.

From the airport in the southwest, the marina and waterfront shops in the west, to views over Catseye Beach and onto Whitsunday Island towards the north. It’s the perfect spot for watching sunrises and sunsets. With all the fog, rain and overcast skies, I didn’t make it up the hill for sunrise. But I did manage to enjoy one stunning sunset up there.

Amazingly, we didn’t meet anyone else up at the lookout despite us climbing up the hill three times. Walking is clearly not on people’s minds when they visit Hamilton Island! 🙂

Passage Peak is another favourite and one that we met the most people on, not that it was crowded.

It’s right at the eastern edge of Hamilton Island so you get some gorgeous views of Whitsunday Island (apparently you can get glimpses of Whitehaven Beach from here) and around to the Lindeman Island group.

The last section is the steepest but it’s steps almost all the way so I found it relatively easy to manage. Plus, I stop so frequently to take photos that I tend to get a chance to get my huffing and puffing under (semi)control.

To get there, take the Easy Bypass Trail or the Saddle Trail. The former is a bit flatter than Saddle Trail but I wouldn’t exactly call it easy either. It’s quite a stunner though where you’ll get lovely views over Coral Cove.

People love this lookout for sunrise. Remember to bring a torch if you’re intent on getting to Passage Peak before sunrise.

Hill Lookout is located along Saddle Trail. It’s quite easy to find as long as you’re prepared for a bit of a climb.

I’m not sure how many people take Saddle Trail instead of the Easy Bypass Trail since it’s a much steeper track. As a result, you’re probably not going to meet too many people along this trail, which might be quite nice.

The view from the Hill Top viewing area is lovely, nestled as it is between Resort Lookout and Passage Peak. Another pretty spot for a sunset!

Distance: 2.5km one-way
Elevation gain: Up to the fire trail and then all the way down again to the cove on the other side (and back again)
Trailhead: Behind the Reef View Hotel

The track to down Coral Cove is also used by quad bikes so it’s rough and feels more like a dirt road than a walking track. You’ll get lovely views of the Lindeman Islands and Coral Cove along the way, at least while the vegetation remains low from the cyclone damage in 2017.

At low tide, you walk across Coral Cove and join the Mangrove Flats track on the other side.

Because there’s no longer any track.

In fact, it’s impossible to find any trail from the beach as it’s completely overgrown. Any remnants of a track are long gone, and then add to that cyclone damage. We ended up wasting a couple of hours walking up and down the beach, sinking into mud in the Mangrove Flats, looking for any sign of a track in vain. In the end, we scrambled up the hillside and found ourselves on the right track all of sudden. Off to Coral Cove, along the Resort Lookout Trail heading south and with views of the Lindeman Islands

So, unless you want an adventure that is more irritating than anything fun, give this one a miss or decide to scramble up straight away. You won’t find the track. I promise.

Distance: 3.3km one-way
Elevation gain: Similar to Coral Cove – up to the fire trail and then all the way down again to the beach on the other side
Trailhead: Behind the Reef View Hotel

Escape Beach probably looks best at high tide so if you can, time your hike so you get there at that time. Like our walk to Coral Cove, we hiked to Escape Beach in the afternoon and only saw it at low tide, making for a rather rocky and muddy beach.

The walk is easy enough though it’s not the most thrilling as it’s mostly through vegetation. But once you turn off at Turkey Nest Junction, it doesn’t take long and you’ll be at the beach. It’s a rocky sort of beach but I didn’t mind it if you can see past the damaged vegetation, low tide and unsparkly weather.

There’s a couple of other walks that you can do, like the South East Head one that takes you to Broken Point. Apparently it’s very steep and we ran out of time in any case.

And if you want to see views but can’t be bothered climbing up the hills and down, jump in your gulf buggy and drive to One Tree Hill Lookout. You may just need to share it with plenty of other people. Early morning on One Tree Hill, just a few minutes before the clouds closed in completely

MORE POSTS ON HIKING IN QUEENSLAND

There’s plenty of spectacular hiking to be had in Queensland. Start with the Gold Coast Hinterland, Springbrook National Park, full of gorgeous waterfall hikes and so does Lamington National Park.

Then hike the Coastal Track at Noosa National Park on the Sunshine Coast for some stunning cliff views, or visit the Bunya Mountains to hit the walking trails there. 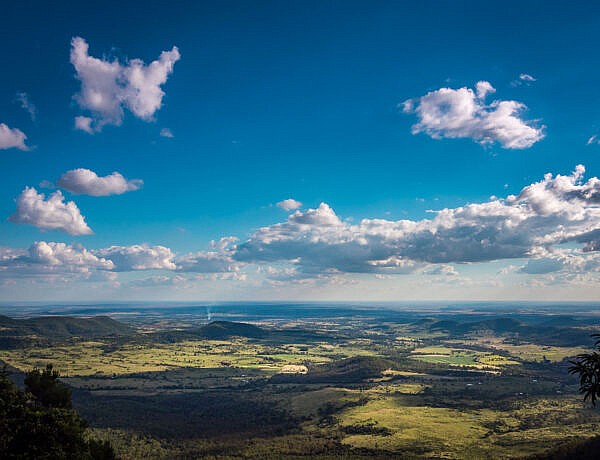 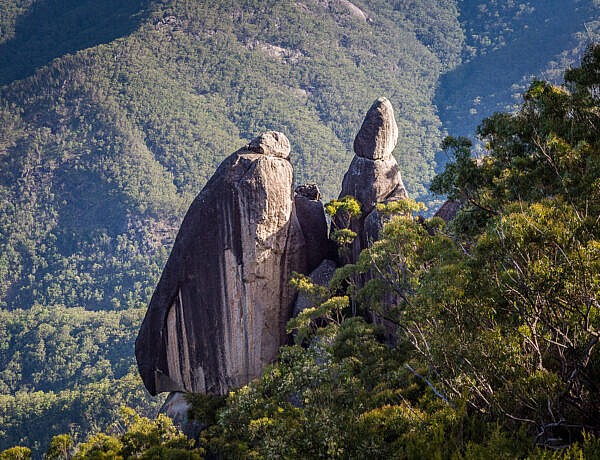